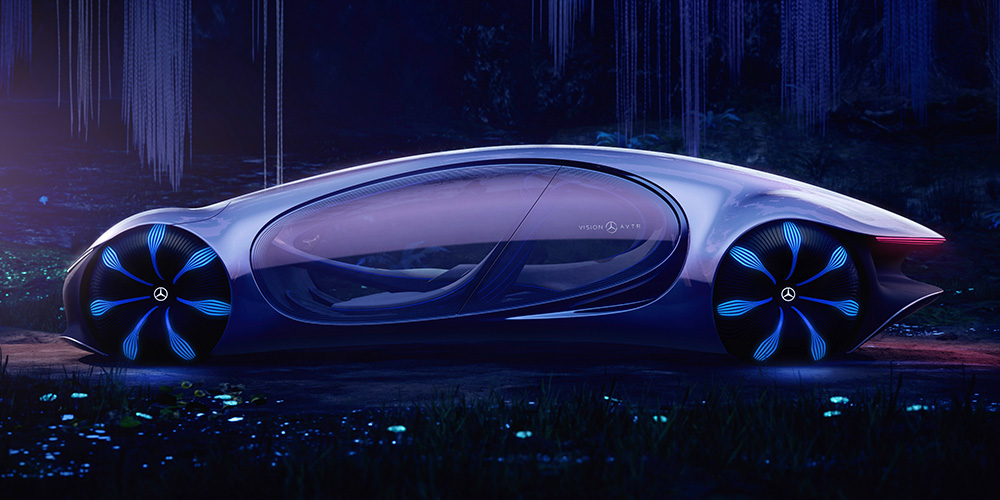 Automotive design will reach exciting new heights in 2020. It has been a long time since this sector has seen so much activity, resulting from climate change, new players in the market and powerful advances in technology and automotive design.

Cancelled. The 2020 Geneva Motor Show was the first ever completely virtual motor show. Since the event was cancelled due to the coronavirus, manufacturers were forced to present their products by livestreaming on the Internet. This challenging task showed just how adept companies are at wielding digital communication to their advantage. Even if people still want to meet in person and experience impressive prototypes and new ideas in the flesh, as physical objects, the notion of a digital trade fair is a highly interesting new concept that offers far greater reach. Virtual Press Day 2020 was a memorable event, commemorating the 90th anniversary of the car show traditionally held on the shores of Lake Geneva.

“The age of the traditional car manufacturer is over,” announced VW CEO Herbert Diess at the Global Board Meeting on 16 January 2020. “The world is on the move. Politically and technologically, we are living in an incredibly dynamic era. There is a turning point ahead of us – comparable in significance to the industrial revolution. Volkswagen is right in the middle of the storm generated by the two biggest transformation processes: climate change and the associated pressure to innovate for zero-emission driving, as well as digitalisation, which is fundamentally changing the car as a product.” Herbert Diess sums up the forces that are influencing automotive companies worldwide, and points out a trend in content that will shape automotive design even more in the coming years.

His message is unequivocal: “In future, the automobile will be the most complex and valuable of Internet devices aimed at the mass market.” With its completely new generation of products, starting with the fully-electric ID.3 compact car and ID.4 SUV, the Volkswagen Group is showing the world its vision of how this device will look and function. These two vehicles represent a generation of smart electric cars that Volkswagen intends to use as a springboard for its new image. And parallel to this foray into the new world, there is still the mass market of the old world: the Golf 8 conclusively affirms the continuation of a long success story, also in terms of design.

Staying in your lane, braking, parking – these days, even small private cars offer driver assistance systems up to level 2. People are gradually becoming accustomed to their car moving independently and carrying out certain manoeuvres. But before private cars can drive autonomously, we must first introduce a new product category – shuttles for public and semi-public use.

This category starts with its own design typology: a higher, almost symmetrical structure, clad wheel arches, side swing doors for convenient access and space for 4–16 people. Manufacturers of such vehicles include VW with the SEDRIC, Jaguar Land Rover with the Project Vector, the e.GO Mover or Cruise, a subsidiary of General Motors. The look of these vehicles is an amalgamation of the minimalist, durable design of public transport with the more emotive and future-oriented style of automotive design. They represent an exciting new category that could gradually make its way onto our streets.

A lounge on wheels

The more autonomous your vehicle is, the more private its interior. The automotive industry is preparing for users to spend even more time in their vehicles. Entertainment, well-being and customisation are becoming more important, as is the desire for visual calm. In place of the 40 individual switches, knobs and buttons that were usual until now, just two displays will provide the flexible interface for mapping all functions in the given situation.

And study prototypes like the Mercedes-Benz AVTR have an interface that is completely integrated in the vehicle’s interior, even including the upholstery. The entire interior of this prototype is incorporated into the interface and display – with touch-activated surfaces throughout the interior, like the skin of a living being.

And the customisation of the interior has also seen advances in current series models, due in particular to the aid of light. In the Golf 8, VW calls it the “Innovision Cockpit”. It automatically identifies the driver, and all the adjustable parameters move to the preset preferences.

The Honda e is also embracing the private look: the back seat of the friendly urban electric vehicle looks rather like a simple sofa. The design of the entire Honda e is minimalist, smart and unpretentious. The form of the front and rear, with a central black bar and rounded rear lights and headlights, follows a consistent design approach. Honda uses these shapes to forge a link with its 1972 Civic, and to provide passengers with a place of repose amidst the hustle and bustle of the big city. A unit of sensors and cameras on the Honda e replaces the radiator grille of the first Civic. This feature echoes the BMW radiator grille in the Concept i4, which also integrates new elements for autonomous driving.

The future is now

When BMW launched its BMW i brand in 2010, it opened up a world of experimentation for electric mobility – ten years later, this has finally been incorporated into the BMW brand with the launch of the Concept i4. “The BMW Concept i4 brings electrification to the core of the BMW brand,” says Adrian van Hooydonk, head of BMW Group Design.

The study prototype provides a realistic outlook on the series production of the i4 vehicle, which is due to go on sale in 2021. The large blue-rimmed radiator grille, now home to smart sensors instead of a cooling unit, is a real eye-catcher. The uniform light grey and copper colour scheme in the interior creates a coherent connection with the external look, although this version is most likely reserved for the study protoype. The interface is also clearly different to that of current series production vehicles: instead of the customary 40 turn and push dials, there is just one simple unit with two screens that hovers above the dashboard. BMW also presented its new logo together with the Concept i4. This follows a similar minimalist style to the VW emblem.

As success depends in part on the design of the fleet as a whole, some new additions have recently been launched: the E-Class now also bears the new face of the Mercedes family. By updating its top-class range, the premium manufacturer is optimising its fleet design, enabling it to integrate the E-Class with even greater impact. The new model is closer to the A-Class, giving it a more youthful look; the focal point of the new radiator grille is at the bottom (like the smaller model) instead of at the top, making the car look sportier and more streamlined.

Land Rover also aims to achieve a better integrated fleet design with the revamp of its iconic Defender model. While the original model of decades ago came across as highly distinctive and angular, this new interpretation successfully transfers its well-known qualities and characteristic form into a modern-day design. Its power and robustness are instantly recognisable, conveying the confidence that this vehicle can get through any terrain.

And the new Seat Leon presents an exciting move in brand management: its gently sculpted contours and curves exhibit a design lexicon that never used to be in the vocabulary of the Spanish automaker. This has become an important point of difference in the vehicle’s design language, especially with regard to its positioning in relation to Škoda and VW, the other brands in the Group. The smooth contours contrast with the angular swage lines that run along the bonnet and sides and pick up again at the back of the vehicle, merging with the continuous LED strip of the rear lights.

The current dynamic developments in the automotive industry are a clear indication of the importance of design, and roles that it plays: thinking ahead, raising awareness, highlighting the options – and then ensuring that the vehicle is convincing, inspiring and actually works in real life.

An excellent automotive design bridges the gap between a well-balanced fleet design and the selection of sustainable materials for the interior. Highly creative skills are needed to relay the various stories in a credible and inspiring way, delving into every little detail to secure user satisfaction and market success.

More articles on the topics of automotive design and mobility Nobody dared to stop us