Haute couture, prêt-à-porter, perfume, photography, shows – the trained ballet dancer and couturier Thierry Mugler, born in Strasbourg in 1948, was successful in many fields. He designed his own world and created an extraordinary style with colourful fashion shows, eccentric fetish models, extravagant backdrops and ever-astonishing collections. The retrospective “Thierry Mugler: Couturissime” first shown in 2019 at the Montreal Museum of Fine Arts is now coming to the Musée des Arts Décoratifs in Paris, having been postponed due to the coronavirus pandemic. The show presents an overview of Mugler’s 50 years in the world of creative artistry and remembers the great significance of the couturier in France and abroad.

The exhibition will open on 30 September 2021 and run until 24 April 2022, covering two floors of the museum. The displays will include ready-to-wear and haute couture silhouettes as well as stage costumes, photographs, films and unpublished archive materials dating from 1973 to 2014. Rather than trying to be a classic retrospective, the exhibition “will encapsulate the life and energy that defined the historic collaborations between Thierry Mugler and his creative alter ego Manfred”. It begins with a themed room that transports visitors into a world populated by fantasy-inspired fauna, from the ocean’s surface to the depths of the sea. Highlights include extravagant and futuristic models from Mugler’s collections “Les Insectes” and “La Chimère” from 1997/1998 with prominent shoulders, plunging décolletés and surreal hourglass waistlines.

The second floor turns its attention to photography, including some of Mugler’s own images. He began photographing his own campaigns in 1976 and playing with the glamour and beauty of his muses such as Jerry Hall and Iman. By inviting Hollywood stars such as Diana Ross, Tippi Hedren and Sharon Stone to model on the catwalk, he also helped to launch the phenomenon of celebrities as models. The exhibition ends with costumes that Mugler designed for the stage. 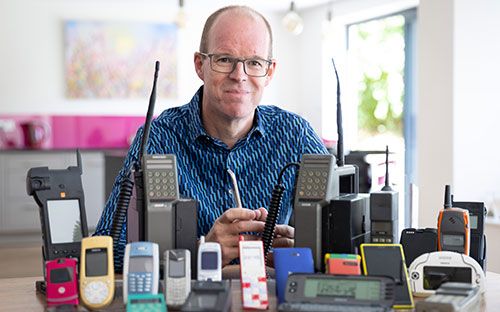 Innovative design. A wooden tower for a wind turbine