Living environments, society, consumption patterns and ways of life are changing rapidly. Rooms at home and in the office are increasingly being replaced by zones. The kitchen and the utensils inside it are also being put to the test. It is little surprise that design newcomers are also drawing inspiration from current issues and are designing concepts for the kitchen of the future. Three design students were honoured with international ein&zwanzig Newcomer Awards for exciting projects that not only offer vision but are also extremely practicable. These awards are presented annually by the German Design Council.

On 20 April 2020, the German Design Council announced which of the 21 newcomers received the highest “Best of Best” distinction.

Newcomer Dirk Biotto, a graduate of Berlin University of the Arts, made a winning impression with his “Trio” project: a three-piece, mobile and independently functioning kitchen that concentrates on the essential elements of cooking, namely, preparing, cooking and washing up.

Biotto, himself a passionate cook, was seeking to respond to the growing population density in cities and the shrinking living spaces that come hand in hand with it. “Not only the way we live will change, but also our values and outlook. Living environments and spaces are converging and merging together,” explains the Berliner. This phenomenon is leading to new spatial concepts.

“The kitchen is losing its central role in our lives and becoming obsolete. What will happen to the existing products?” asks Biotto in his master’s thesis, finding a unique answer. “Trio” offers a kitchen reduced to the essentials, detached from any architectural environment. The hob, for instance, is operated with a gas tank, the water for the sink is situated in an overhead canister and the waste water is collected beneath the sink, making for a highly mobile kitchen that swiftly follows the user every time he or she moves house.

Limited resources force users to consume them as consciously as possible – a return to conscious cooking and a conscious awareness of the kitchen.

Problem-solving was also a focus area for Sebastian Kommer, graduate of the Industrial Design programme at Muthesius University of Fine Arts and Design in Kiel. His “N.O.S.W.” project, consisting of a 3D rattan veneer (karuun®), stone connectors and a chopping board, is the quintessential multifunctional bread bin. It can be used to buy, store, prepare and serve baked goods. However his design was informed by more than just the idea of practical benefit, reflecting a desire to promote sustainable design and adopt a holistic perspective. His motivation came from asking, “What are the overall conditions in which a product is created, and how, where and for what is it used?”

Accordingly, the design student wished to use only materials the origins of which he could trace for his award-winning design. In this process, Kommer discovered karuun®, the veneer of the rattan palm from Indonesia. The farmers who work there receive fair pay from the manufacturer, out for space GmbH, and the local economy receives support.

Sustainability also means increasing the appreciation and awareness of the product. The results of this are a long product life and stronger attachment. Artefacts can act as a trigger to think differently if the product is developed sustainably and if consumers are able to understand that as well.

Hand-manufactured. A shape deformed into perfection.

In times of mass production, where identical objects are manufactured on assembly lines in their thousands, unique pieces are highly regarded in the design world. Manuel Kugler’s goal with his “Tryk” porcelain objects was to manufacture individuality in serial production and develop gifts such as bowls and cups that stand out through their uniqueness.

To achieve this goal, Kugler experimented with porcelain clay. After extruding the porcelain, the designer deliberately encouraged individual deformations through manual actions, for example by folding, bending and squeezing. The dead weight and instability of the porcelain clay create a range of unique objects thanks to the variations in the moisture level.

It was only by experimenting with porcelain clay that I was able to see how the material behaves and what actions produced what results.After a few different attempts and steps in the development process, I created a machine with which I could define the diameter as well as the surface structure using interchangeable matrices. 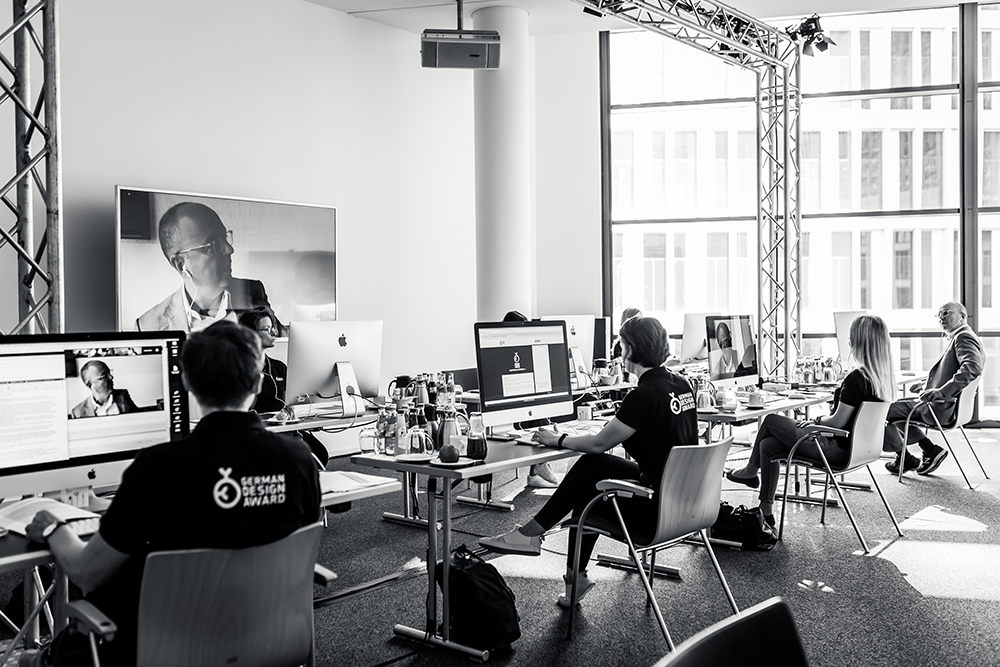 Events after Corona: Paths to the future conference