The news from Dezeen has hit everyone in the design community like a bolt from the blue: “We are,” shared Benedict Hobson, “very sad to announce the sudden and unexpected death of Dezeen founder, CEO and editor-in-chief Marcus Fairs at the age of 54. Marcus, who was a brilliant journalist, visionary entrepreneur and much-loved father, husband, colleague and friend, was admitted to hospital on Tuesday last week after feeling unwell. After a short time in intensive care, he died on Thursday 30 June 2022. He is survived by his wife Rupinder Bhogal, who is also a director at Dezeen, his children Jordi and Millie Fairs, his parents David Fairs and Georgina Ledward, and his sister Elly Fairs.”

When the internet was still in its adolescence and the established newspapers and magazines were still at odds with the mobile medium, Marcus Fairs recognised the tremendous opportunities it offered. In 2006, he founded Dezeen (as they say, “in his guest room”) together with Rupinder Bhogal. What started out as a blog for news from the architecture and design community and background reports quickly developed into one of the liveliest journalistic platforms and one of the world’s most popular online magazines in the creative sector. With clever ideas, targeted contacts, great skill and a sense of how important access and speed were in the still untested medium at the time, he drove the transformation of online design journalism. But Fairs was not only successful journalistically. As a company, he also continuously expanded the Dezeen brand, opening up and establishing areas such as Jobs, Awards Showroom, Studio and Watches.

Fairs, who had a degree in 3D design, began his career as a journalist at the architecture magazine “Building Design” and later at “Building”, where he rose to become deputy editor-in-chief. He also worked freelance for “Blueprint”, the “Guardian” and the “Independent on Sunday”, as well as for “Conde Nast Traveller”. In 2003, he founded “Icon”, a successful international magazine for architecture and design, which he ran until November 2006. Not only the magazine, but also he himself received numerous awards, in 2002 as Journalist of the Year, in 2004 as Architecture Journalist of the Year. In 2005 he received an award for the best branding initiative. Later, as founder and editor-in-chief of Dezeen, Marcus Fairs also received numerous awards. In radio and television, the busy mediator was also present: in 2003, he wrote and presented a documentary on the French designer Philippe Starck for the BBC; in 2006, in the major BBC series “Home”.

When Dezeen was acquired by Danish media company JP/Politiken Media Group in 2021, Marcus Fairs wrote: “Dezeen exists to provide a platform for our global community to share, celebrate and discuss the best work and the most important issues. We want Dezeen to be able to continue to do this. We want Dezeen to forever be a bastion of independent journalism, a champion of architecture and design, and a force for good in the world.” What signalled a departure then sounds like a legacy now.

Dr. Oetker launches fish finger pizza on the market for a short time 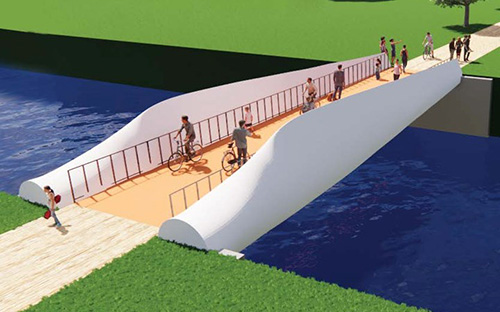 Re-Wind works on the reuse of wind turbine rotor blades