In December 2019, the European Commission presented a plan to make the European Union carbon-neutral by 2050. Specific reduction targets were set for the years 2030 and 2050, though it was unclear how much each economic sector and member state was to contribute to the desired reductions or what achieving the targets would cost. Consulting firm McKinsey has now developed a proposal named Net-Zero Europe. Decarbonization Pathways and Socioeconomic Implications. It outlines what would be needed in order for the European Union to achieve its goal of connecting ecology and economy in different industries.

To reveal a cost-effective and feasible pathway “to a net-zero Europe”, more than 600 “decarbonisation lever business cases” were identified in 75 subsectors and ten regions. The report rated the optimal way to apply them to reduce emissions and the effects they would have on employment and other socioeconomic factors. Five sectors emit the bulk of the European Union’s greenhouse gases: 28% come from transport, 26% from industry, 23% from power, 13% from buildings and 12% from agriculture. Across all sectors, the biggest source of greenhouse gases, accounting for 80% of emissions, is fossil-fuel combustion. The report states that not all of these emissions will need to be reduced to zero because negative emissions in some sectors can offset the hardest-to-abate emissions in others. Nevertheless, the report also notes that achieving the targets will require significant changes in all sectors. The outcome “is not a forecast, but a scenario that departs profoundly from current trends”.

Some of the key messages in this “macro view” (PDF) include: sectors would need to reduce emissions in parallel and reach net zero in sequence. More than half of the emissions reductions could be achieved with mature and early-adoption technologies. Decarbonising Europe will cost less if the burden is shared effectively. Nearly EUR 1 trillion must be invested per year; cost savings would offset increased capital spending. Policy interventions would be required to stimulate investment. The transition would yield a net gain of five million jobs. Energy security and competitiveness could increase. These results require that all stakeholders take action now. The messages conclude with an insight: if the cost increases and savings of decarbonisation were passed on to households, the aggregate cost of living for an average household in a carbon-neutral European Union nation would be roughly the same as it is today. Middle- and lower-income households would even see some savings, leading McKinsey to find “that the European Union could reach net-zero emissions at net-zero cost by 2050”. 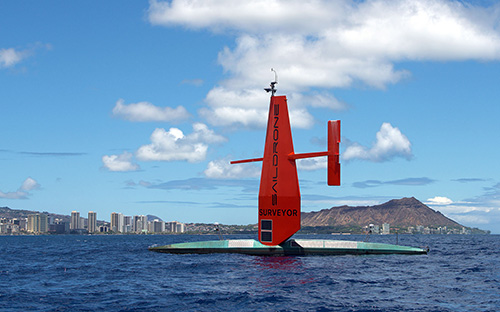 Saildrone maps the ocean floor between San Francisco and Hawaii