He was quite a controversial jack-of-all-trades: on 15 December, the typographer, graphic designer, consultant, typeface scholar, essayist, speaker and university lecturer Kurt Weidemann would have turned 100.

Kurt Weidemann (1922 to 2011) would have turned 100 on 15 December 2023. Remembering him is no easy undertaking. Since the man is no longer with us, the accent can only be placed marginally on his personality with its sometimes somewhat gruff charm. What remains is what is lightly called “his work”, i.e. everything that Kurt Weidemann designed in, with and around typography, including his many other activities. But to call him a typographer and graphic designer only captures part of the truth. Kurt Weidemann’s achievements in the field of signs, typefaces and typography cannot be understood independently of his temperament, the diversity of his activities and the range of his statements. If the term were not devalued as remote from life, one could call him a type scholar. In which case it would still remain unmentioned how virtuously he also knew how to use spoken language as a medium of communication. To put him under the broad heading of visual communication only leads further if one considers “visual” and “communication” both together and separately. Kurt Weidemann, for example, has, as one of his book titles proves, “taken words – put on the scales – for a ride”. In other words, he weighed them as precisely as someone who loves and masters language and knows how to handle it like a writer. In short: Kurt Weidemann does not fit into any pigeonhole. There must be many, if any. Which is why: if you want to characterise him, you have to quote him at least in detail.

It is no coincidence that the history-conscious literary connoisseur Kurt Weidemann (whether Heine, Goethe, Schwitters or Confucius, he knows and quotes them all) has prefaced his reflections on words with a poem by the recently deceased Hans Magnus Enzensberger entitled “Altes Medium” (“Old Medium”). It begins with the words: “Was Sie vor Augen haben, / meine Damen und Herren, / dieses Gewimmel, / das sind Buchstaben. / Entschuldigen Sie. / Entschuldigen Sie. / Schwer zu entziffern, / ich weiß, ich weiß. / Eine Zumutung. / Sie hätten es lieber audiovisuell, / digital und in Farbe.” (What you have before your eyes, / ladies and gentlemen, / this bustle, / are letters. / Excuse me. / Excuse me. / Hard to decipher, / I know, I know. / An imposition. / You’d rather have it audiovisual, / digital and in colour.) Yes, many people would like to have access to the world audiovisually, digitally and in colour. But Weidemann deliberately stuck to the simple tools of the trade, by no means out of ignorance of innovations. We will come back to this later.

Deutsche Bahn and the bosom bow

Regarding the companies Kurt Weidemann worked for, there were many, and not just the smallest. The list is as long as it is illustrious. It ranges from publishing houses such as Klett, Ullstein, Propyläen and Siedler to the Deutsche Bundespost, from corporations such as Shell, Mercedes-Benz (where he replaced several dozen typefaces used until then with his “Corporate A.S.E.” typeface family), Deutsche Bank, Bankgesellschaft Berlin, Merck, Porsche (where he made the coat of arms clear and the logo unmistakable) and Zeiss. In 1993, Deutsche Bahn AG commissioned him to redesign their logo, which had been taken over from the West German Bundesbahn. Weidemann’s solution: he put the letters “DB” positively red on white, which increased the conciseness and also saved the railway a lot of money on screen printing ink. (The news magazine Der Spiegel reported under the title “Zu viele Busenbogen” (“Too many bosom bows”) on the dispute that flared up between Kurt Weidemann and his colleague Erik Spiekermann at the time about the quality of the new logo. The two internationally renowned type designers argued “like tinkers”).

No matter how one assesses it from a distance, when it came to the appearance of a – possibly globally active – corporation, it was naturally the bosses who were in demand for Weidemann. He was aware that hierarchies and power relations play a role. So he spoke with Edzard Reuter, Heinz Dürr, Wolf Jobst Siedler, Heinrich Klotz and Lothar Späth. As a communicator, he was, as they say today, so well connected that even sovereigns let themselves be invited by him for breakfast talks. He was not only friends with Alfred Herrhausen, the spokesman of the Deutsche Bank board who was killed in a bomb attack in 1989; he also edited his writings. Of course, Weidemann also developed new typefaces – such as “Biblica” (later ITC Weidemann) and “Corporate”. He also drew up “Zehn Gebote zur Typographie” (Ten Commandments for Typography), which can hardly be surprising given his self-confidence. He also designed many things without his name being mentioned.

Vanish behind the product

Being able to create was Weidemann’s elixir. He insisted, as Uta Brandes puts it, that the “individual should create something so successful that he disappears behind his product (and can afford it, it should be added)”. Whether it is the Ullstein edition of Hegel’s “Phänomenologie des Geistes” (Phenomenology of the Spirit), the blue-blue-white Thieme volumes on medical topics or a Daimler-Benz AG annual report, his designs have never lacked obstinacy and conciseness. His ambitions always focused on readability. The reader should grasp the meaning and significance of the text, not be prevented from doing so by the extravagances of the graphic designer. Achieving this remained hard work, which one should not see in the result. In the volume “Worte und Werte” (Words and Values), in which Kurt Weidemann has compiled particularly pithy sayings and aphorisms from his speeches and texts like aphorisms, it says: “To bring writing to people’s eyes for reading is a service. The more quietly, simply and unobtrusively it is done, the better it is.”

Study time by its language

That Weidemann was so much more than a typesetter is also confirmed by his numerous speeches and essays. Given progressive specialisation in design, he aimed at the whole. According to Kurt Weidemann, we can study our time and control ourselves through language. Accordingly, he knew what to say about advertising steam chatter and the greed for originality: “Thinking before you say nothing is sometimes the better way.” And as a recommendation: “Before you ask what matters, you should know what matters.” At another point, Weidemann makes it clear: “If you can’t communicate clearly, you can’t think clearly.” He summed up what such thoughtfulness means for design as light-heartedly as aptly: “Design today – and will be even more so in the future – is design thinking: it captures the visualisation or visual translation of invisible processes, the linking of previously unrelated functions and activities, the transformation of uncertainties into the understandable, into the insightful.” Weidemann was not only a communicator, consultant, speaker, essayist and scribe, he also taught, no less intensively than he did everything else. In doing so, he took to heart what he himself wrote: “The relativity of our judgement is guided by advantages. Prejudices can become prejudices. These usually have a firmer foothold than the change of standpoint in the power of judgement.” Ergo: Since you can no longer experience him alive, read up on what he said and wrote.

Kurt Weidemann considered the mother tongue to be “the real home of human beings”. As good as he was at communicating, he was clearly aware of the magnificence of silence. He gleefully castigated the “Aküfi, the abbreviation mania. In today’s mania for mutilation, language loses its life, the sentence its sound and its melody. (“The Esüdro (Einkaufsgenossenschaft süddeutscher Drogisten, Purchasing Cooperative of South German Druggists) once bought for the Südrofa (Süddeutscher Drogeriefachverband, South German drugstore association). You have to let such phonetic combinations melt on your tongue. You have finally arrived at the slurred sounds of Donald Duck and should consequently move the company headquarters to Disneyland to feel at home there”). Of course, he also had something to say about the punctuation of the text. For example, he used the sentence “Man thinks, God directs” to demonstrate how “an indispensable fact” can be given meaning in the composition of a sentence with a dash or a full stop. There is much more to say about Kurt Weidemann. We prefer to stick to the poet. Enzensberger’s poem goes on like this:

(But whoever is really serious / about virtual reality, / let’s say: / Fill bush and valley again, / or: Lonelier never / than in August, or also:/ The night swings its flag, / who gets by with little. / Twenty-six / of these black and white dancers, / completely without graphic display / and CD-ROM, / as hardware a pencil stub / that’s all.” Weidemann stuck to it. The pencil stub worked on any scrap of paper, completely without electricity or internet access. Meanwhile, the poet concludes his lines: “Excuse me. / I apologise / I didn’t mean to offend you. / But you know how it is: / Some never forget.)

Tomás Maldonado. The Age of Conception 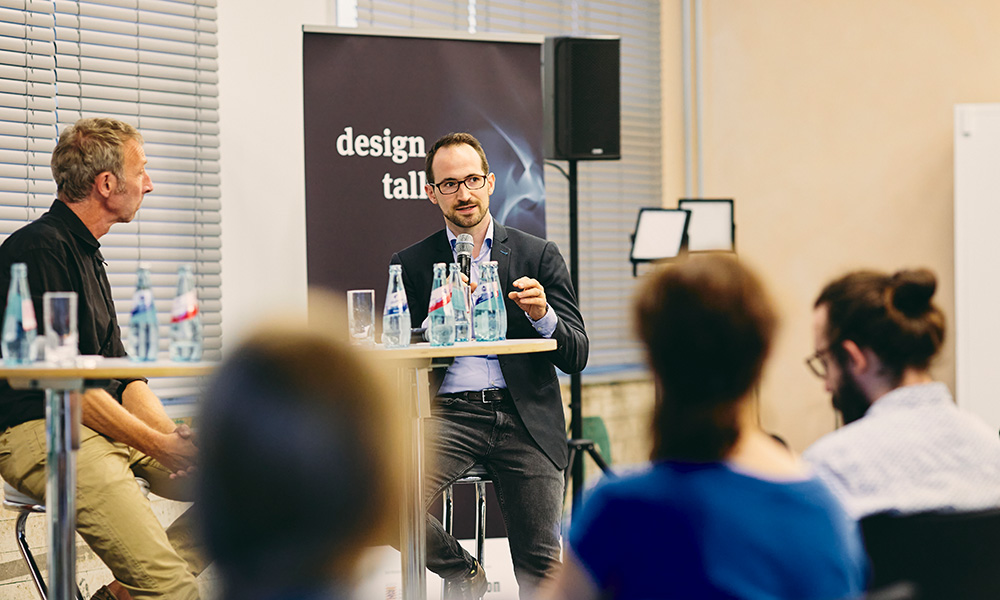