On the occasion of the 50th anniversary of the 1972 Olympic Games, the IDZ invites you to a discussion on the vision of the Munich Games and the status quo as well as the future of the Olympic movement on 26 August. The event at Berlin’s Akademie der Künste on Pariser Platz is part of the “otl aicher 100” initiative, which highlights Otl Aicher’s multifaceted thematic cosmos with the online platform otlaicher.de. Aicher, whose centenary we are celebrating this year, was responsible for the visual appearance of the Munich Games as design commissioner.

The officially commissioned photographer of the organising committee of the 1972 Olympic Games shows his view of the emergence of a utopia – a vision as a counter-design to Berlin 1936 and to games of the present like 2022 in Beijing. De Riese was an attentive observer in front of and behind the scenes and accompanied the Games and their protagonists, including Otl Aicher, Willi Daume as well as the officials of the IOC and its president Avery Brundage. His photographs show sports venues that did not serve as purely functional architecture, but were created as a backdrop for an Olympic festival with its own special spirit. The 1972 Games present themselves as a timeless and, to this day, unique intercultural event that brought people together, where the world was a guest in the best sense of the word. 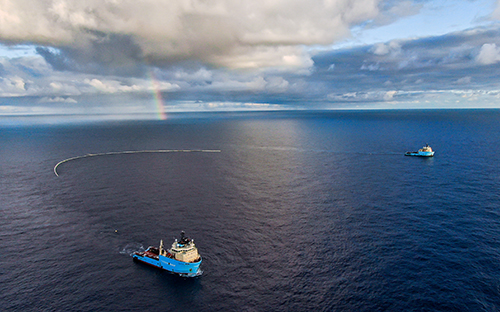 The Ocean Cleanup. Jenny collects almost 30,000 kilograms of rubbish from the sea

A flying eye to watch over the home