A piece of wall or a door panel in the car that serves as a loudspeaker? A loudspeaker as small as a coin? Or one that can be used to wallpaper an entire room? Speaker systems that can be placed almost anywhere and still sound good are in demand. A team from the Massachusetts Institute of Technology (MIT) has developed a paper-thin loudspeaker that can turn any surface into an active audio source. They presented an extremely lightweight, hand-sized paper-thin loudspeaker that can basically be glued to any surface, consumes little energy and produces high-quality sound. To achieve these properties, the researchers developed a manufacturing process reduced to three basic steps.

Unlike conventional loudspeakers, where electricity flowing through a coil of wire creates a magnetic field that moves a diaphragm, which in turn moves the air above it to produce sound, the innovative system simply moves a thin film of piezoelectric material. In most thin-film speakers, the film must be able to flex freely to produce sound, which is made more difficult when it is attached to a surface. To solve the problem, the MIT team relies on tiny domes (15 microns high, about one-sixth the thickness of a human hair), each vibrating individually, on a thin layer of piezoelectric material. Spacer layers on the top and bottom of the film further protect the domes from abrasion and impact during daily handling, increasing the durability of the speaker. The sounding thin film requires only about 100 milliwatts of power per square metre of speaker surface. To produce a similar sound pressure at a comparable distance, an average home speaker consumes more than 1 watt of power.

Such a thin-film speaker can not only reproduce sound and be used for immersive entertainment, in theme parks or in the theatre. In high-noise environments, such as in the cockpit of an aircraft, it could also provide active noise cancellation. The system could also use ultrasound to detect where a person is standing in a room, as well as be used to create light patterns for future display technologies or in liquids to stir chemicals. And because the speaker foils are lightweight and consume little power, they are well suited for applications on smart devices with limited battery life. “It feels remarkable to take what looks like a slender sheet of paper, attach two clips to it, plug it into the headphone port of your computer, and start hearing sounds emanating from it. It can be used anywhere. One just needs a smidgeon of electrical power to run it,” says Vladimir Bulović, the head of the Organic and Nanostructured Electronics Laboratory and lead author of the study. 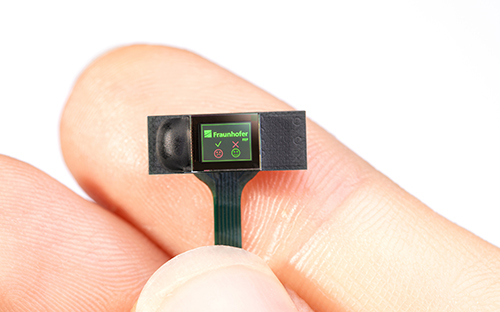