Ken Garland was born in Southampton in 1929. After studying design at the Central School of Arts and Crafts in London in the early 1950s, he worked for six years as the art editor of Design magazine, the official trade journal of the Council of Industrial Design. Garland lent the British Campaign for Nuclear Disarmament (CND) a visual identity in the 1960s and, moreover, was himself an active member of the campaign without ever earning a single penny from it. It was during this era that he also reworked the peace symbol designed for the CND by Gerald Holtom in 1958, making it the simplified, bold illustration that is circulated widely today. Ken Garland & Associates, the company he founded in 1962, produced designs for an array of businesses, brands and institutions, including the London College of Printing, the Science Museum, Jonathan Cape and Galt Toys. “Those who worked with me between 1962 and 2009 have always been designers designing – no secretaries, no typists, no drudges,” said Garland. Ken Garland taught at places such as the Central School of Art and Design, University of Reading, Royal College of Art and University of Sussex in Brighton throughout his career. He also wrote numerous articles for design magazines in the UK, the US, Europe and Japan, along with multiple books including “Graphics Handbook” (1966), “Illustrated Graphics Glossary” (1980) and “A Word in Your Eye” (1996). He and his wife, artist Wanda Garland, established Pudkin Books in 2008, a publishing venture releasing a series of picture books that used the heading “A Close Look at …” to study a specific subject.

Garland achieved worldwide renown in 1964 for the “First Things First” manifesto written with his colleagues, which called for a reversal of priorities in favour of more useful and sustainable forms of communication. It also encouraged designers not to waste their talent on consumer goods and instead to use them to improve society. The manifesto has been updated on multiple occasions. The 2020 version reads like this: “We, the undersigned, are designers who have been raised in a world in which we put profit over people and the planet in an attempt to grease the wheels of capitalism and keep the machine running. Our time and energy are increasingly used to manufacture demand, to exploit populations, to extract resources, to fill landfills, to pollute the air, to promote colonisation and to propel our planet’s sixth mass extinction. We have helped to create comfortable, happy lives for some of our species and allowed harm to others; our designs, at times, serve to exclude, eliminate and discriminate.”

In 2020, Ken Garland was presented with the “Lifetime Achievement Medal” at the London Design Festival for his “significant contribution to the development of graphic design since the mid 20th century”. He passed away at 92 years of age on 20 May. 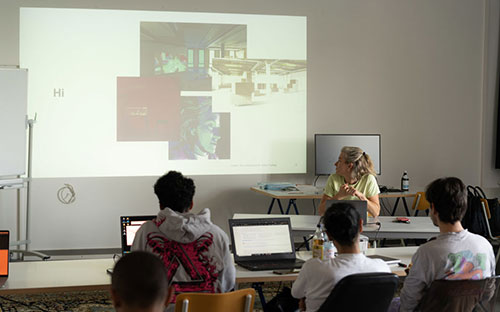