In summer, when it is very hot, many people like to drink cold coffee. Cold brew coffee is a big hit then. What is less well known is that it takes quite a long time to make cold coffee. This is because cold brew coffee involves extracting coarsely ground coffee in cold water for several hours, which dissolves around 90% of the aromatic substances and at the same time 70% fewer bitter substances and acids from the coffee grounds than hot brewed coffee. A team from the chemistry department at the University of Duisburg-Essen wanted to shorten the cold brewing phase and developed a new process to do so: Instead of letting the coffee grounds steep for at least twelve hours at room temperature, the process now only takes three minutes. In the process, water together with the coffee powder is illuminated with an ultra-short pulsed laser for about three minutes – without the mixture being heated. The result: both the caffeine and the bitter substance concentration correspond to conventional “cold brew coffee”.

Dr Anna Rosa Ziefuß got the idea from an ideas competition organised by her doctoral supervisor Prof. Stephan Barcikowski. “The intention behind it was to get us thinking beyond our own research,” says the chemist. She knows why cold-brewed coffee is so trendy: “It doesn’t taste as bitter and has more aromas. It also contains less acid and is easier to digest.” With her brewing variant, Ziefuß not only won first prize in the GUIDE ideas competition, but together with her team colleague, food engineer Tina Friedenauer, also came third in Chemstars.nrw’s “From Lab to Market Challenge”. Now Ziefuß and Friedenauer want to spin off “LEoPARD” – “Laser-based Extraction offers Pure and Advanced Refreshment Drinks: “It’s not the coffee, but the laser-based production process that has an enormous event character. So we imagine renting out appropriate laser systems for events like weddings. But you could also rent it out or license it to coffee houses.” In addition, the process could also become interesting for the beverage industry in the future, as tea or matcha could also be produced in this way. 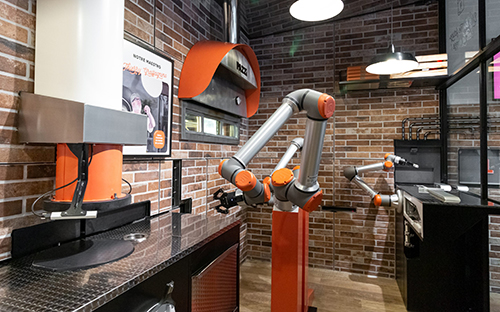 Pazzi Robotics. In Paris, a robot plays the pizza maker

Touching no longer allowed: the doorknob is now an object of suspicion.