Ritter Sport has caused a stir in the chocolate market with its new product. Named “Cacao y Nada”, it is the company’s first chocolate to be made 100% from cacao. Its sweetness comes solely from natural cacao juice, which Ritter derives using an innovative method. Unlike previous chocolates with an extremely high cocoa content, the new product tastes sweet and not bitter, and it is intended to appeal to the taste buds of those who normally find high-cocoa chocolate to be too bitter. As such, the premise sounds promising. While the juice of the cacao pod has been an approved food item in the EU for a year now, chocolate is not allowed to be called chocolate in Germany if it does not have any sugar added. “It is absurd,” says Andreas Ronken, CEO of Ritter Sport. He is calling for German food product laws to “keep up with these types of innovations”. If “sausages are allowed to be made from peas, then chocolate does not need to have sugar. Wake up! This is the new reality.” Based on Ritter’s interpretation of the applicable regulations, the new product can only be sold as a cacao pod block for the indefinite future. The cacao juice obtained from the company’s own plantation is currently only enough for 2,300 blocks, so the innovative product is only available as a limited edition online and at the Ritter Sport shop in Waldenbuch while stocks last. One 57-gram square-shaped block retails for EUR 4.99.

According to Wirtschaftswoche magazine, Federal Minister of Food Julia Klöckner has recently corrected Ritter’s interpretation of the law and unmasked the campaign as a “supposedly ingenious PR strategy”. Klöckner said to Wirtschaftswoche that Ritter Sport is very much able to call its new creation chocolate, adding, “The cocoa products regulations (KakaoV) do not limit the use of sugar ingredients to specific types of sugar. For this reason, a product that uses natural cacao juice can also be sold under the name ‘chocolate’, based on our ministry’s assessment.” Ritter said to the magazine that it was not going to get into an argument with Ms Klöckner, but it did see the legislation differently. “The sweetener that we obtain from cacao juice and use as an ingredient”, said Petra Fix at the Ritter Sport media office, “does not correspond with any type of sugar under the specified sugar products regulations (ZuckArtV) because it does not have enough sweetness.” Consequently, she argues that there is a problem in the cocoa products regulations, which specify that there must be a type of sugar added to chocolate along with cacao. Whatever the outcome of this debate about the correct legal interpretation, the “cacao ‘and nothing else’” epithet seems very optimistic indeed at this point in time. 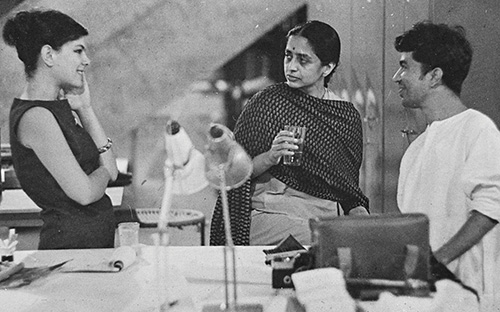 Gira Sarabhai, co-founder of the Indian National Institute of Design has died