The striking look of the “Mugler woman” includes padded shoulders, low-cut necklines and an hourglass waist. It was made famous in the 1970s by top models from Jerry Hall to Kim Kardashian. The extravagant and futuristic models from the “Les Insectes” and “La Chimère” collections of 1997/1998 are among the highlights of Mugler’s work. Thierry Mugler, who was born in Strasbourg on 21 December 1948, is one of the greats in the world of fashion. With extravagant theatrical gestures and designs and productions that reach into science fiction fantasies, he has been able to shape entire worlds. Haute couture, prêt-à-porter, perfumes, photographs, shows – Mugler was successful in many areas. With colourful fashion shows, eccentric fetish models, extravagant backdrops and always surprising collections, he shaped his very own style.

At the age of 14, Thierry Mugler was accepted into the ballet corps of the Opéra du Rhin; he then studied costume design at the École supérieure des Arts Décoratifs in Strasbourg. Even then, he tailored his first designs from clothes he found at flea markets. In his twenties he moved to Paris and began working for various fashion houses in Paris, London and Milan. The theatrical – opera, drama – with references to Wagner and Beethoven became a characteristic of his creations. In 1973, he founded his own label under the name “Café de Paris”, and one year later the company “Thierry Mugler”. His designs, which were as sophisticated as they were striking, quickly became famous. His career reached its first heights with the design of costumes for David Bowie and Klaus Nomi.

Mugler was a pioneer in staging large-scale fashion shows in front of thousands of spectators. He knew how to put models and models in the right light, controlling everything from the props to the soundtrack. His first perfume for women, “Angel”, launched in 1992, was such a success that it even rivalled the legendary Chanel N°5 at the counter. In 1997, the cosmetics company Clarins took over the brand rights. Shortly after the turn of the millennium, Mugler withdrew from the fashion world and his brand (which already belonged to the L’Oréal group at the time). Under his personal name Manfred Thierry Mugler, he began designing eye-catching custom pieces for stars like Lady Gaga, Beyoncé, Kim Kardashian and Cardi B again a few years ago. Mugler also designed his own body. He practised intensive bodybuilding, underwent numerous cosmetic operations, meditated, did yoga and henceforth let himself be called “Manfred T. Mugler”. The large-scale retrospective “Thierry Mugler: Couturissime”, which started in 2019 at the Museum of Fine Arts in Montreal, can be seen at the Musée des Arts Décoratifs in Paris until 24 April. Last Sunday, the designer died at the age of 73. 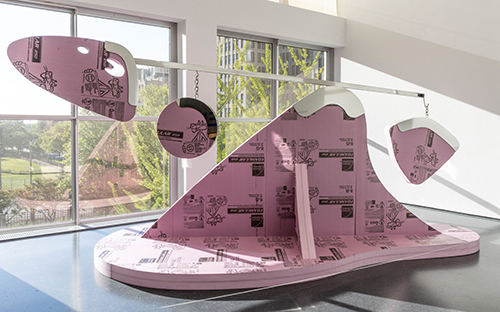 Fabriqué en France. France gets a new mark of origin